1. The History of Mogu

Mogu is a game in that one person on horseback goes ahead dragging a ball made of bush clover and wrapped with animal.

It was discontinued from middle of the times of Joseon, the times of Joongjong and restored in 1606(the 39th year of king Seonjo) stimulated by Japanese invasion of Korea in 1592 and then disappeared into the history ending in 1631(the 9th year of king Injo). After that, it was restored by Korean race traditional horseback feats of arms & gyeokgu association and was performed in 1998 and 2003. 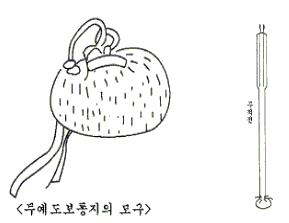 Mogu is also called Gigu(氣毬). Mogu is a ball made of bush clover wrapped with leather and large one is the same size as a water melon. It is same as so called Gigu(氣毬). So called Gigu has one more loop on it and tied to a rope and while it is drawn by a person on horseback, others follow and shoot it with arrows without head.

Kumsayeji(金史禮志)≫ reads 'Shooting willow gyeokgu(射柳擊毬) game is a customs of Yo dynasty. On the day of dano, after the decorum of bowing to the heaven(拜天禮), the ground of shooting willow gyeokgu(揷柳毬場) is marked with pumpkin on tree branches and the bark of the trees aer peeled off up to 2-3 chi to become white. A person leads running on horseback and others follow him and shoot arrows without a feather and the head is put across.’

In 1424(6th year of king Sejong), king gathered soldiers and naturalized persons-Olryanghap(兀良哈) and Oljeokhap(兀狄哈) in Gyeonghoeru, Gyeongbok palace and let them shoot arrows and gave the prizes of a horn bow to each of the ones who successfully hit the Mogu in all 3 attempts and thereby Mogu began to be executed in Joseon. On December 13 of the 6th year of Sejong, king let soldiers and naturalized person shoot arrows in Gyeonghoeru, Gyeongbok palace and served a party.

I already gave first instruction (抄記) about Gwanmujae in Mohwagwan. Horse back archery is to be done in two times and 3 arrows are to be shot and 3 spears are to be thrown. A small target is to be made of Mogu and is to be shot 5 times from the distance of 100 steps(步). Because there are many other skills to be performed, the small target is to be shot 5 times. Now, among the military officials, 10 of court nobles and under court officials are to be divided into justify and right and each side is to be of 5 persons. But, since there are some with good feats of art among them, the Ministry of War should divide the shooting grade evenly and let them shoot the small target to determine win or loss. I will grant young horses to the winners so tie 10 young horses to pine trees nearby so that many people can see. I will grant a good horse(良馬) to the best person of all of the court nobles and under court officials(良馬).

Since Mogu played an important role in the practice of feats of arms, it was tested when the army was being inspected and at that time, military officials and warriors including all generals along with Saboksi and Naekumwi were required to perform Mogu and excellent ones were granted of swords or bows etc.

On September 24 of the 36th year of king Seonjo, king ordered the Ministry of War to test persons with skill.

On August 24 of 25th year of king Injo, king observed feats of arms and viewed arrow shooting test in Seogyeo.

Mogu is same as horseback archery in that the arrows are shot from horseback but is an advanced type in that the mark, i.e the target moves.

Since the target moves, it was one of important feats of arms on horseback for the practice to exert power in hunting or battles.

(Photo) Korean race traditional feats of arms on horseback & gyeokgu association restored Mogu based on literature and demonstrated it in the playground of Korean military academy in September, 1998 for the first time in modern times and executed 2nd demonstration in front of Heungre gate of Gyeongbok palace in May, 2003. 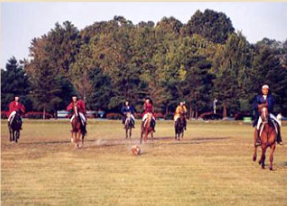