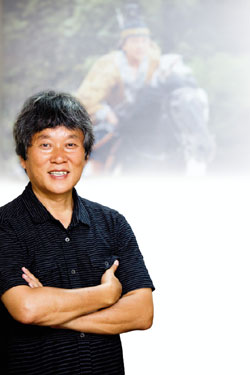 The teams and the chiefs of organizations who have participated in the proud 1st International Horseback Archery Competition in that the peoples of the world gathered to be unified to one in Sokcho that consists of mountains, a lake and is adjacent to the sea with one of the longest history in the world participated with the messages containing the peace of the human in the horseback archery competition in that tradition and elegance harmonized together and established a foundation to provide the opportunity to develop a ground in that more world's peoples can participate to exhibit the elegance of tradition to the full and extend the skill and the horseback archery competition has been reborn as a culture that would not be faded under the shadow of each country's old tradition and became a ground opening a new chapter of a proud human culture that is succeeded to the present times instead of becoming a history to be forgotten. The players and their families that visited Korea from distant countries abroad, with their presence, revive the horse riding culture of each country, restore the horse riding culture in 21st century and wrote a record of history containing the spirit of ancestors on this earth.

The culture is succeeded one by one by the efforts that create life from the huge flow of the context connected from the past to the present and then to the future and the liveliness will grandly flow as the origin of the human.

The world of now can be said to be a time of competition based on culture.  If there is no mediator of culture with live history and root in the field of culture and festival based on the culture of a country, that country should have no standpoint anywhere as if the power source is missing. With the 1st International Horse back Archery Competition, we could find that the traditional culture of archery and horseback archery of each country have not been discontinued but are being succeeded and conveyed being remembered as a culture of the human.

Now, the horseback archery competition has been reborn as a field in that everybody from a child to an adult can participate and be together instead of the space limited to the occupation of professional performers and the root was the proud field that we are maintaining as the ancestors of the human in the past did.

Beginning with the 1st International Horseback Archery Competition, it has become the time to open friendly competition through the festival that is open for participation of anyone of the world peoples and for which the traditions and horse riding cultures of all of each country of the world will gather in one ground. Like our ancestors were so 2,000years ago, we are about to rewrite the history to contain our minds, bodies and spirits on the very today at this very position. The horseback archery competition is the one that contains the history and root of our race and will become a history that will be co-owned by our youths and write a new chapter of proud racial culture.